Harvey Klinger is a character in The Brady Bunch. He was played by William Corcoran.

Harvey was one of Marcia Brady's first love interests. A rather classically nerdy, bookish type, Marcia went steady with him briefly. He was a considered by the rest of the family to be a nerdy insect collector. 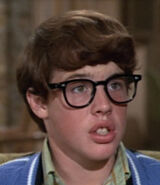 Add a photo to this gallery

Retrieved from "https://bradybunch.fandom.com/wiki/Harvey_Klinger?oldid=9005"
Community content is available under CC-BY-SA unless otherwise noted.