Lloyd J. Schwartz (born May 2, 1946) is an American television producer and writer.

On June 6, 2008, a stage musical debuted in Los Angeles called A Very Brady Musical. The show was written by the Schwartz and his sister Hope Juber. The music was written by his sister and brother-in-law Hope and Laurence Juber. Schwartz directed the production, which starred his wife, Barbara Mallory and his son Elliot Schwartz as Carol and Greg Brady.[2] 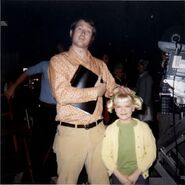 Retrieved from "https://bradybunch.fandom.com/wiki/Lloyd_J._Schwartz?oldid=6074"
Community content is available under CC-BY-SA unless otherwise noted.